Gone are the days when a pick-up could be constructed from little more than a few bits of pig iron perched atop some cart springs. Perhaps mindful of that, the new Ford Ranger is now laden with more safety gizmos and connected features than ever before.

Almost since the Ford Ranger was launched, enterprising retailers have been merrily bolting on a range of rufty-tufty accessories to attract the growing number of people who feel a chunky 2.5-ton pick-up truck just isn’t bad-ass enough for them. Now the new Ranger Raptor is about to put them all to shame.

A new Ford Ranger will arrive mid way through 2019, sporting a new 2.0-litre EcoBlue diesel engine, the option of a 10-speed automatic transmission, and a wider range of driver assistance technologies.

While most people probably think of pickups as a fairly simple creation, these days buyers expect something more from their working vehicles: like all-day comfort, for one. That makes designing the modern pick-up a rather more delicate balancing act than it used to be, one that some manufacturers seem to struggle with, with more than one recently-launched pickup arriving onto the market while, shall we say, significantly under-engined. Thankfully, there is an answer in the form of the Ford Ranger, and with the option of a 3.2-litre five-cylinder it’s currently the most powerful pickup on the market.

New Ford Ranger on its way to Europe by 2012

A new Ford Ranger pick-up, on sale later this year, makes its first public appearance in Europe at the Geneva Motor Show next month

The new Ford Ranger arrives in the UK this autumn with a new, more powerful 2.5-litre TDCi diesel engine and a new exterior look 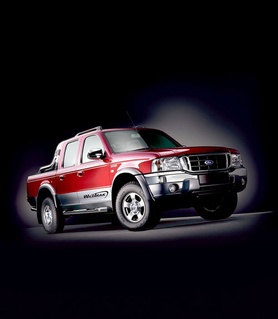 Ford today announced a new special edition Ford Ranger Wildtrak, available as a Double-Cab, loaded with extras and priced at £19,100

Ford Ranger Double Cab and Super Cab models 4x4 pick-ups for delivery from late July will come with prices up to £1,300 lower than before and some will carry extra kit