The objections of many to the rise of the 4x4 have been well documented. Dubbed planet-killers and gas-guzzlers, they’ve been the subject of much social hatred and envy attacks. But is all this hand-wringing warranted? And, more controversially, what would happen if you made a 4x4 with the emissions and fuel economy of an average family car? For the third generation Mercedes M-Class, that’s just what they’ve achieved.

The Mercedes-Benz ML 350 BlueTEC Sport has triumphed in the 2013 Towcar of the Year Awards, winning its category.

Mercedes-Benz has revamped the M-Class for 2008, with re-designed bumpers, headlights, and radiator grille as well as interior quality improvements and revisions to the engine line-up to improve economy 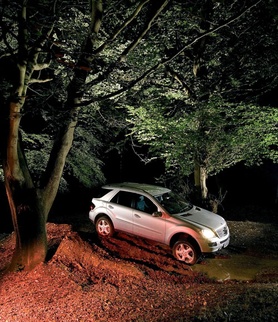 The new Mercedes-Benz M-Class, which went on sale on 15 September, is now available to order in ML 280 CDI guise

Mercedes has released the first official pictures of the new M-Class off-roader, due to arrive in the UK next autumn