A few years ago, I pitched an idea to a number of car manufacturers, that of using the existing forward-looking camera that powers the wave of new safety features as a built-in dashcam. At the time, no-one seemed interested. But when the new Citroen C3 was unveiled, the company also demonstrated its new ConnectedCAM system. Turns out it's just as useful as I hoped it would be...

The new Citroën C3 will make its world debut at the 83rd Geneva Motor Show next month. It'll go on sale in the UK in early summer 2013, with emissions from as low as 87 g/km

Citroen has announced the introduction of its most CO2 efficient conventionally powered model to date - the new C3 e-HDi 70 Airdream EGS VTR+ - with emissions of just 87g/km and combined cycle economy of 83.1mpg

Citroen has released first details of the new C3, a completely redesigned successor to the popular C3 supermini, set to arrive in the UK early in 2010

Citroen has created a special edition of its funky convertible supermini, the C3 Pluriel - The Charleston. The limited edition model will be unveiled at next month’s Paris Motor Show and is expected to go on sale in the UK in early 2009

Citroen has created a new special edition for the summer - the C3 Pluriel Latte - with a new body colour, leather upholstery and air conditioning

The Citroen C3 is now even better value for money thanks to the introduction of a series of important enhancements which make it more stylish, safe and refined than ever before

Citroen has launched the VTR version of its C3 supermini, available until the end of January 2005 with a £2,000 cashback 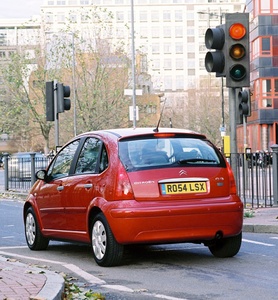