The Mercedes A-Class and B-Class are now available in a new ECO SE grade that brings reduced emissions and enhanced fuel economy as a result of weight-saving measures, aerodynamic improvements and engine refinements.

The new Mercedes A45 AMG is available to order now, priced from £37,845, with first deliveries expected in August. The first AMG with fewer than six cylinders is also the first production car to achieve 181 hp per litre.

The new Mercedes-Benz A-Class A45 AMG

Mercedes is producing an AMG version of the A-Class for the first time, with the new A45 AMG, featuring a 2.0-litre turbo engine that delivers 360 hp and 450 Nm of torque, making it the most powerful four-cylinder production engine in the world

Mercedes-Benz has opened up a whole new chapter in the premium compact segment with the exciting new A-Class, and has revealed a stunning model line up and keen pricing ahead of the vehicle launching to the UK in December 2012

At the centre of Mercedes-Benz's presence at the Geneva Motor Show will be the world premiere of the new A-Class, which will feature engines ranging from 109 hp to 211 hp, and emissions from just 99 g of CO2/km

Mercedes-Benz has launched a Special Edition A-Class with a combination of equipment, sporty looks and practicality to offer greater value for money 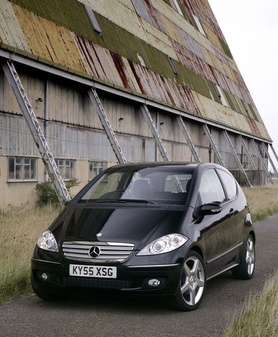 Mercedes-Benz has unveiled its most powerful A-Class yet - the range-topping A 200 Turbo - available from October from £20,695

Mercedes has revealed the new A-Class, due to appear in UK showrooms in the spring of 2005